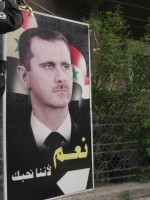 Last night, NBC News, citing government officials, reported that the Syrian military had completed the process of loading sarin gas into aerial bombs. These reports, if true, mean that the military is ready to deploy chemical weapons if so ordered by President Bashar al-Assad. Accordingly, this morning STAND released an action calling upon the Obama administration to work with multilateral partners to ensure that civilians in Syria are protected from further mass atrocities. It’s a simple, three-part action (emailing the White House, calling the White House comment line, and sharing on social media), and I urge you to take a moment to visit the page and take the action.

High-ranking officials within the Obama administration, up to and including President Obama himself, have issued strong statements against the use of chemical weapons by the Syrian government. Secretary of State Clinton said such actions would constitute a “red line” that would trigger a strong U.S. response. To date, the administration has not specified what such a “response” would entail.

As the student-led movement to end mass atrocities, STAND is concerned not about “red lines” but about the protection of civilians and the prevention of future atrocities. This is as much the case with regard to Syria as it is with regard to any of our other conflicts of concern. STAND’s action today reiterates that civilian protection must be the paramount consideration in the U.S. government’s approach to the situation in Syria, and particularly its response to any preparation for the use of chemical weapons.

As student advocates without access to the intelligence data that is seen by high-level policymakers, we often lack the information necessary to determine for certain which policy approach will best achieve the goals of civilian protection and atrocities prevention. This is especially true in a situation as complex and rapidly changing as that in Syria. Consequently, today’s action is a statement of principle, not policy: we are reminding the administration of the criteria by which we expect them to make their decisions, but we are not at this stage taking a position on what that decision should be. This is not out of timidity, but rather out of prudence, based on a due recognition of what we as U.S.-based student advocates know and do not know about a very volatile situation.

Many commentators have raised the possibility of U.S. or multilateral military intervention in Syria should chemical weapons be utilized against civilian populations. STAND urges the U.S. and all governments to act with due regard for the very severe consequences that could result from such an action. The Responsibility to Protect doctrine, which we endorse, does not automatically call for military intervention in every conflict, even a conflict with humanitarian consequences as severe as that in Syria. Indeed, explicitly acknowledging the risk to civilian populations posed by military action, R2P allows such action only as a last resort, and only when a strict set of criteria have been met. STAND’s position is that all governments, in choosing whether to intervene militarily in any conflict, should act on the basis of these criteria. Again, we are not concerned with “red lines,” nor do we support dramatic action for the sake of dramatic action; we are concerned solely with the protection of civilians from harm. We are not at this moment taking a position in favor of or against military intervention in Syria, but these are the principles upon which we expect our leaders to act.