Sadly, Boko Haram’s violence is on the upsurge.  January was Boko Haram’s second-deadliest month ever but violence fell until May, which was their least deadly month in close to a year.  During this period there was also the Nigerian election and the peaceful transition of power from President Goodluck Jonathan to the new president, Muhammadu Buhari.  However, between June 27th and July 11th Boko Haram killed over 500 people, with further attacks in recent days.  Coupled with continuing problems in the Nigerian government, this resurgence in violence suggests the optimism of the past few months may have been misplaced.

Boko Haram’s violence seemed nearly unstoppable early this year, with a weak Nigerian military incapable of slowing their attacks.  Yet in five weeks Nigeria made more progress than they had in years, reclaiming 17 of 20 local government areas that had been controlled by Boko Haram with the help of Chad, Niger, and controversial South African mercenaries.  The election of Muhammadu Buhari, an experienced general whose campaign focused on defeating Boko Haram, also offered promise after years of government neglect of the threat posed by Boko Haram. Boko Haram’s violence decreased each month from January to May, and there were signs that differing views towards ISIS may have been causing a split in the organization.

However, it has not all been smooth sailing for Buhari, especially since Boko Haram’s increase in violence.  He came into office with a nearly bankrupt country and the low price of oil causing a huge hit to the government treasury.  The budget shortfall left the government struggling to pay salaries of civil servants and the military.  Further evidence also emerged that the Nigerian military had committed extensive human rights abuses against civilians in their fight against Boko Haram.  Buhari did take a positive step by moving the military’s command center to Maiduguri, close to Boko Haram’s insurgency.  The U.S. has also agreed to increase military aid to Nigeria, having withheld aid in the past due to the Nigerian army’s history of human rights abuses.  Yet Buhari’s administration remains extremely empty, as he has struggled to fill cabinet positions and recently fired the heads of the army, navy, and air force.  Whether Buhari’s government will be able to fight Boko Haram in these circumstances remains to be seen.  Even if the government has a strong and coordinated response, it will take many years to address the marginalization of Nigeria’s northeast that gives rise to Boko Haram.

Throughout the decline in Boko Haram violence this year, it was unclear whether Boko Haram was struggling to survive or laying low while preparing for renewed attacks.  While there may be some truth to the former, Boko Haram’s recent attacks suggest the latter.  Boko Haram has launched suicide bombings and attacks by gunmen often multiple times a day.  They have also expanded the range of their attacks, attacking not only their normal targets in the northeast, but also Kano, Jos, and even the Chadian capital N’Djamena.  However, while these attacks still are extremely deadly, they do not necessarily mean Boko Haram is returning to its past strength.  Boko Haram’s recent resurgence has focused almost entirely on terrorist attacks rather than re-gaining territory. The geographical expansion of their attacks, too, may suggest that Boko Haram is focusing on spreading terror in recognition that it is not strong enough to win in traditional battles. 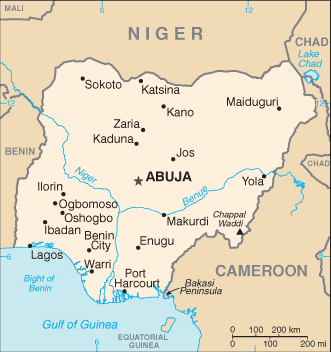 While Boko Haram has generally targeted areas around Maiduguri, recently they have attacked Kano, Jos, and Chad’s capital.

Relative to their violence earlier this year, Boko Haram’s recent resurgence remains small.  Yet reports still emerge of Boko Haram attacks killing three, eleven, twenty-five, or forty with such regularity that the shocking becomes mundane.  The lowest monthly violent death toll of 2015, May’s 767, is still more than almost any conflict in the world.  Although the situation is brighter than it has been in the past, it is still very, very bleak.