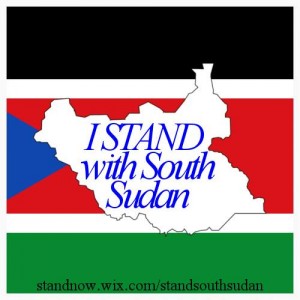 Over the past year, the ongoing civil war in South Sudan has only worsened conditions for civilians. In the face of months of ethnic violence, South Sudan is in the midst of a major humanitarian crisis. Not only have over 1 million people been displaced, but 3.8 million are in need of humanitarian assistance. The largely man-made crisis is about to get much worse. Already teetering on the edge of famine, South Sudan’s government has expelled foreign workers. Once in effect, the decree will prevent NGOs from offering critical assistance to people who need it the most.

It’s time to come together in solidarity with these civilians and raise awareness about South Sudan’s crisis. On September 29, students across the world are participating in STAND’s “media fast” (STANDFast) from their electronic devices to raise awareness about the current crisis in South Sudan. In giving up social media for a day, we remember the thousands in South Sudan who have had so much more taken from them. As you fast from social media, STAND asks that you leave an “away message” on your e-mail, facebook, twitter, etc. provided here to raise awareness for the cause. During STANDFast 2014, students can also make donations to UNHCR’s efforts in South Sudan to support humanitarian relief efforts for displaced and at-risk South Sudanese.

Stay tuned for more information to get involved! We’ll be sending an email with more information. You can also check out the STAND website for South Sudan for unfolding developments in the campaign.