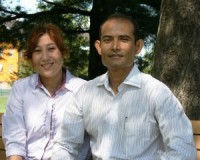 This blog post is a continuation of our series on Burma.  It is written by Maung Maung (Tony) Than and Mya Nandar Aung, 2013 Oak Human Rights Fellows at the Oak Institute at Colby College.

Realization and appreciation of democracy in Burma can only be possible when all ethnic minorities, including the Rohingya, enjoy their rights equally as their fellow Buddhist Burmans. However, decades of anti-Muslim propaganda instigated by the military-ruled Burma had a huge effect on Burmese, pushing many Buddhists to become racists and extremists.

As a result of the violence in Rakhine State last year, about 140,000 Rohingyas have been forcibly displaced into camps that systematically segregate them from the rest of the community. Thousands of Rohingyas’ homes have been burned or destroyed and thousands had to abandon their properties and businesses with little hope of regaining their previously peaceful lives. The Rohingyas who remain in their original houses are living in terror. Rohingyas have been and continued to be subjected to systematic discrimination such as population control, restriction of movement, denial of access to health services, and education. They are always at the risk of arrest, beatings, physical harassment, sexual harassment, forced displacement, forced labour, and arbitrary taxation. Put simply, the Rohingya have been subjected to expulsion from their own birthplace since 1978.

Be one to call for action by condemning the following:

“All human beings are born free and equal in dignity and rights.” – Universal Declaration of Human Rights, Article 1

Let us give Rohingya children a well-deserved dream for the future.

One thought on “Protect the voiceless”