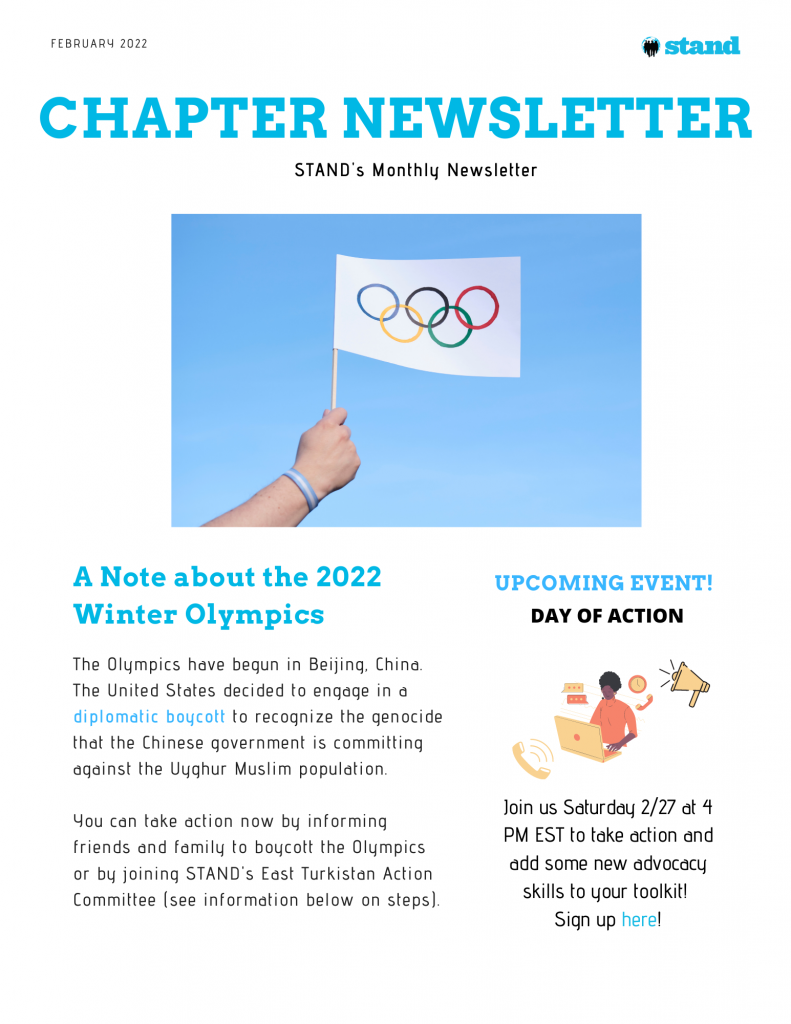 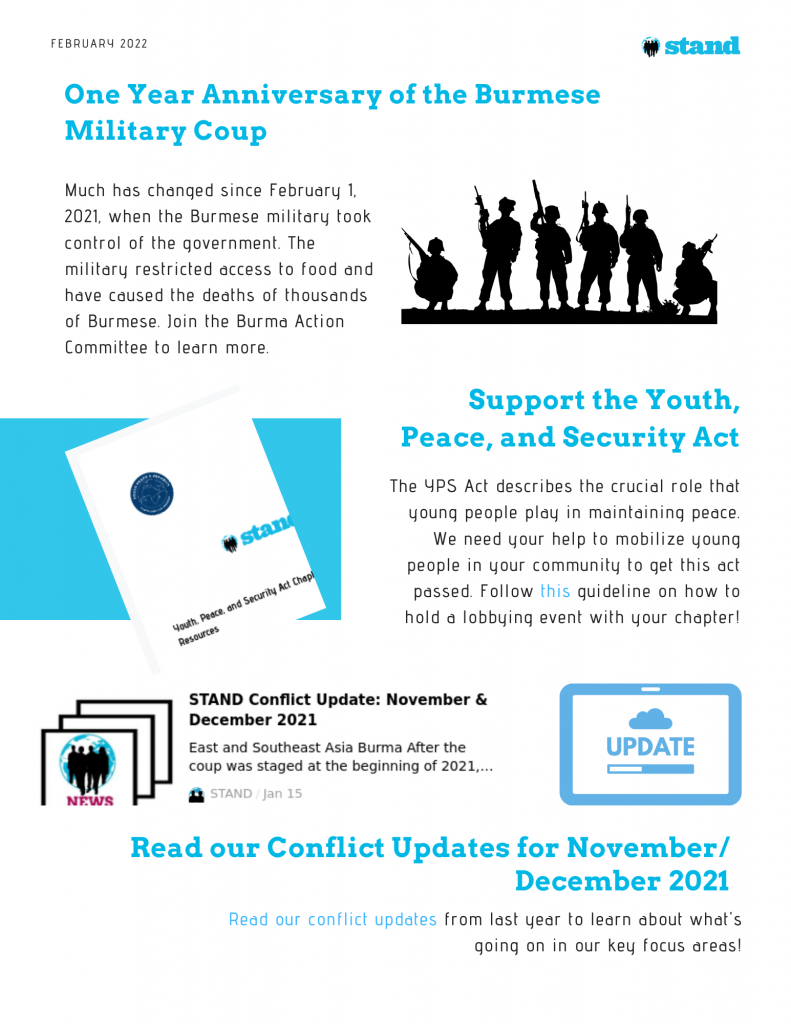 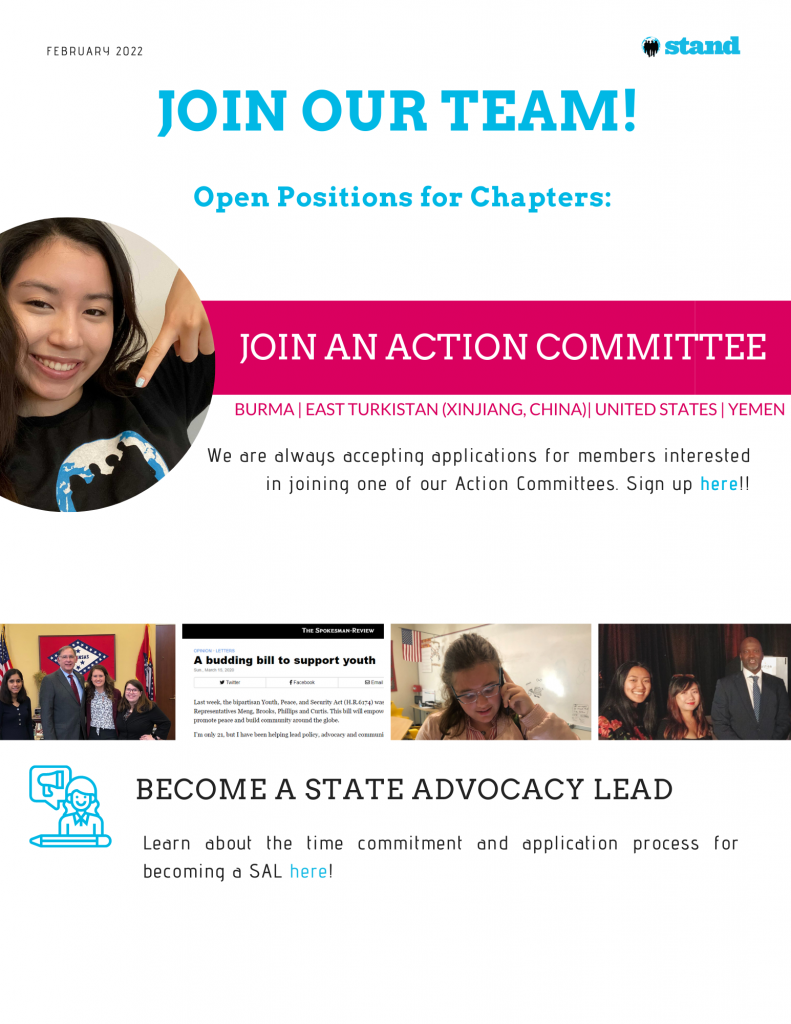 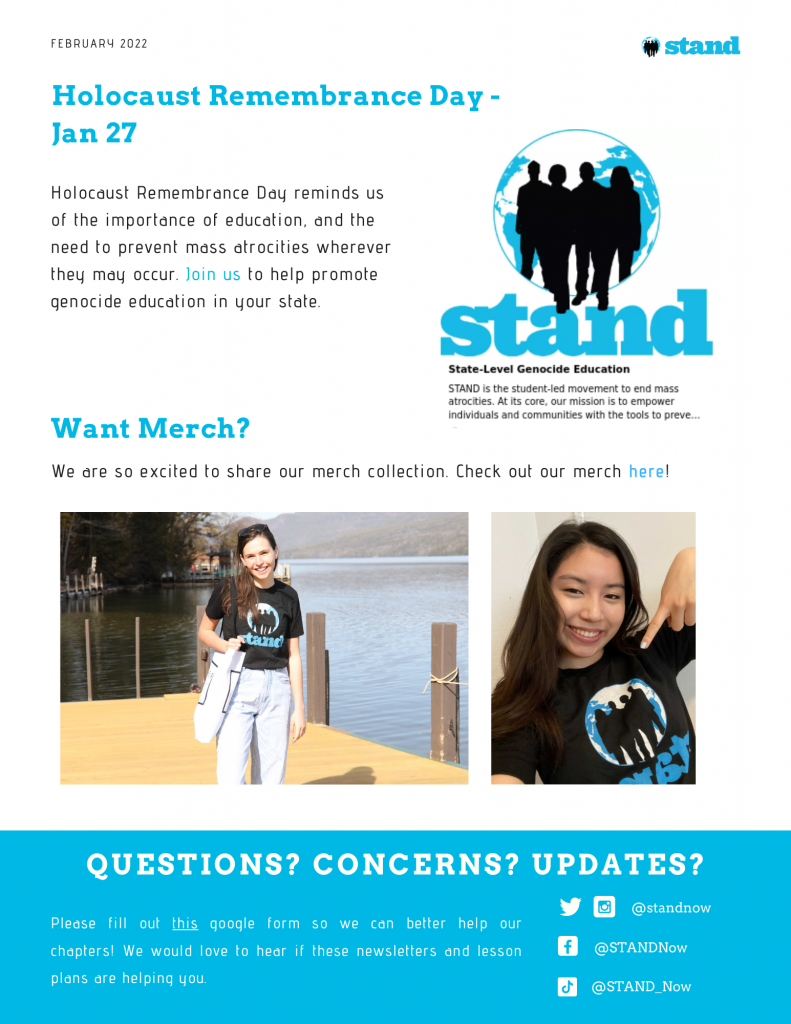 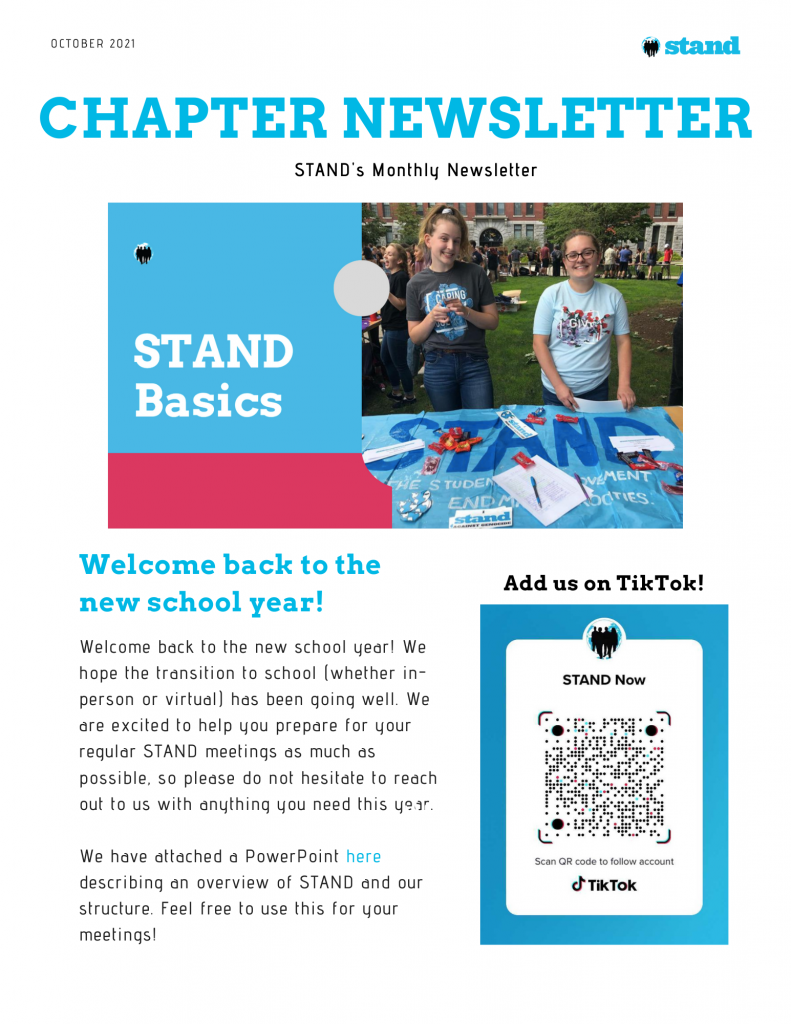 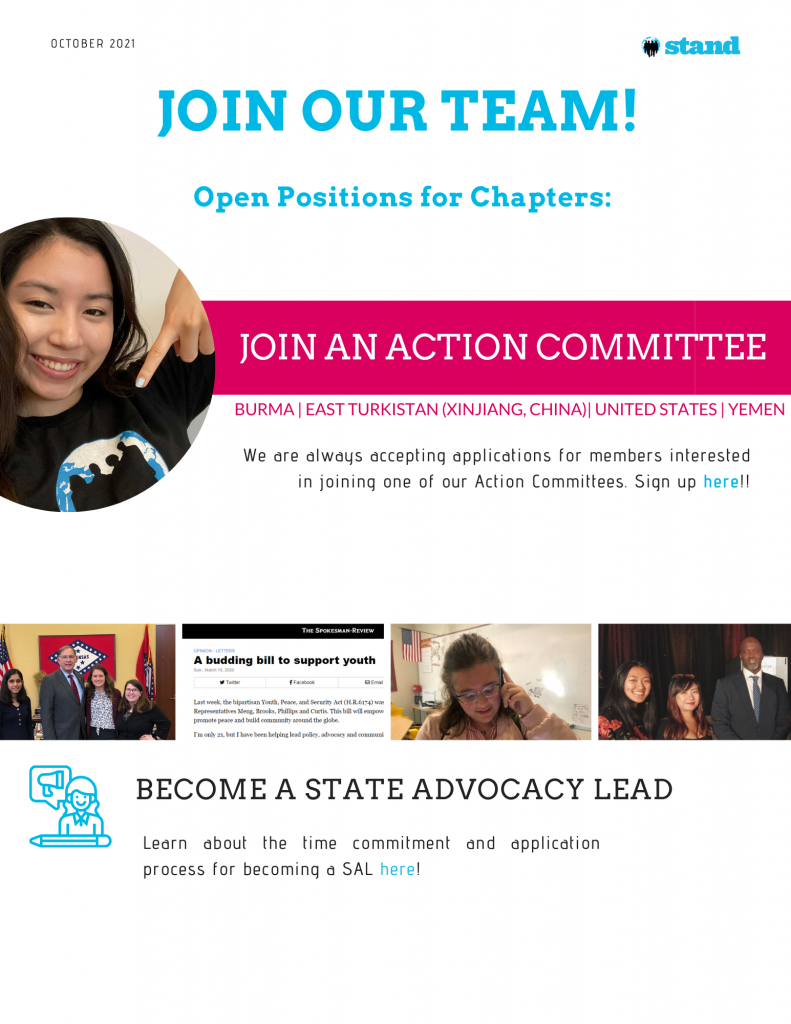 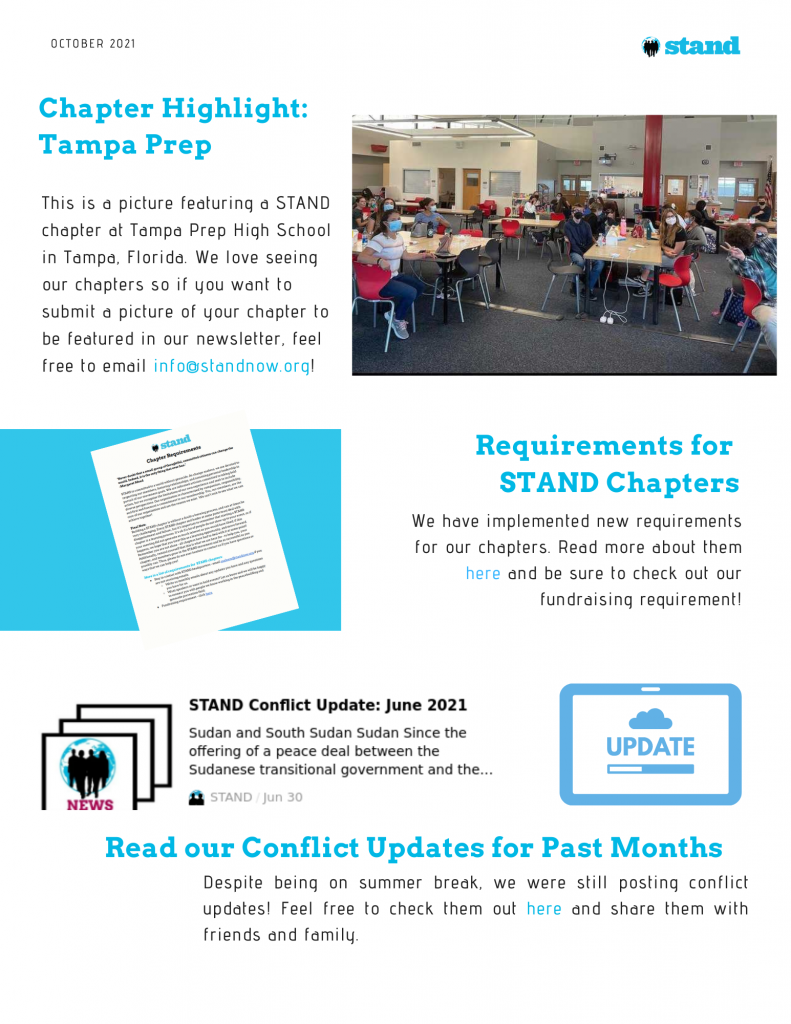 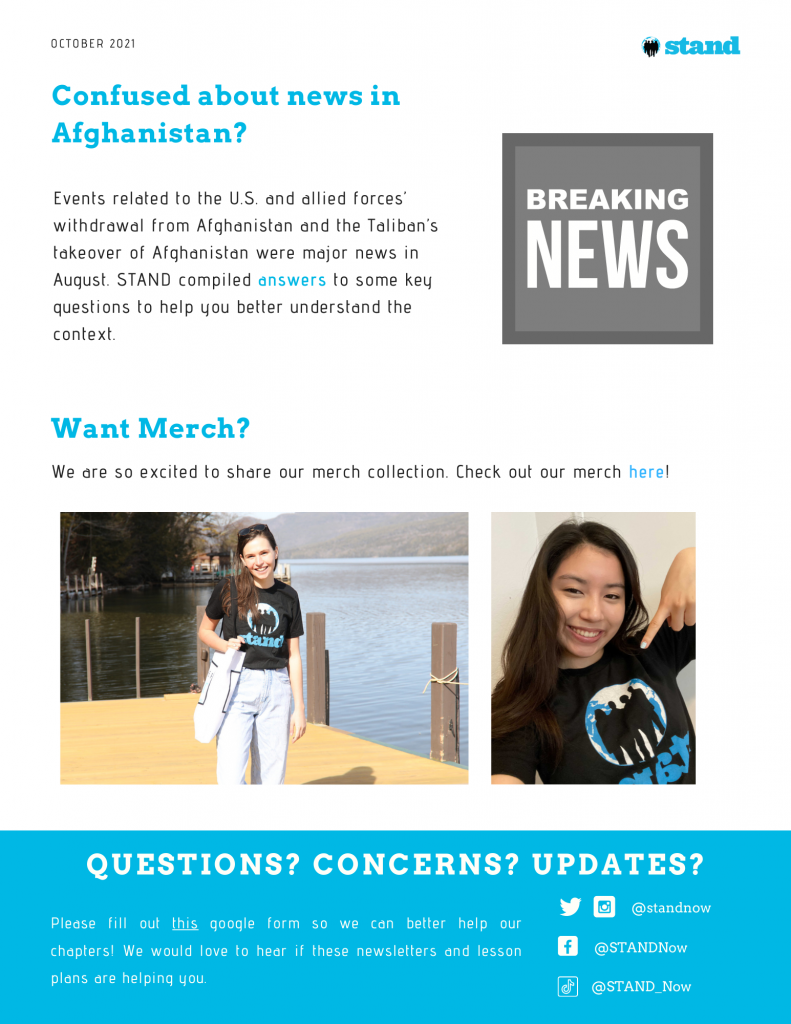 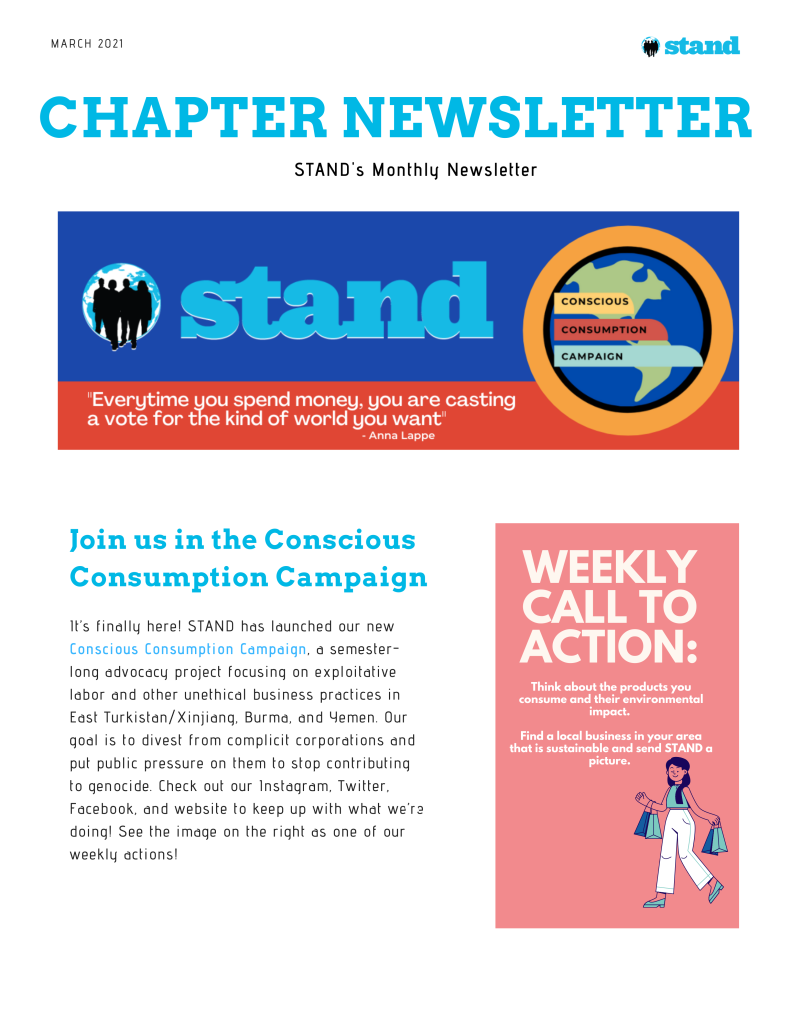 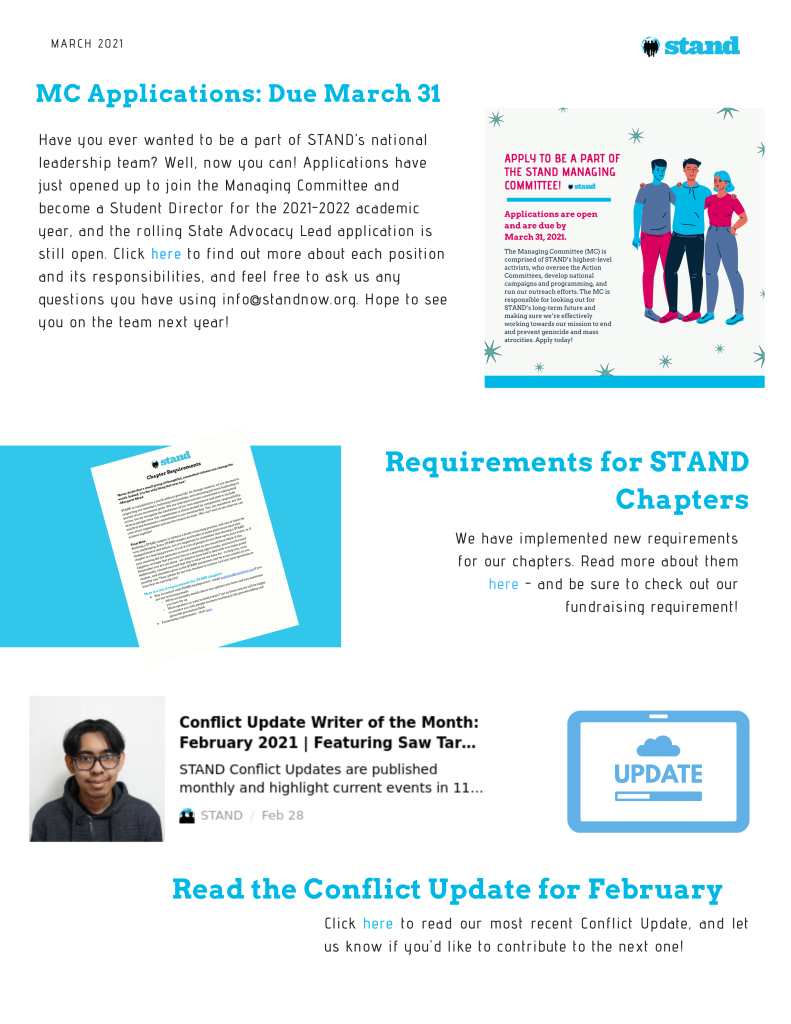 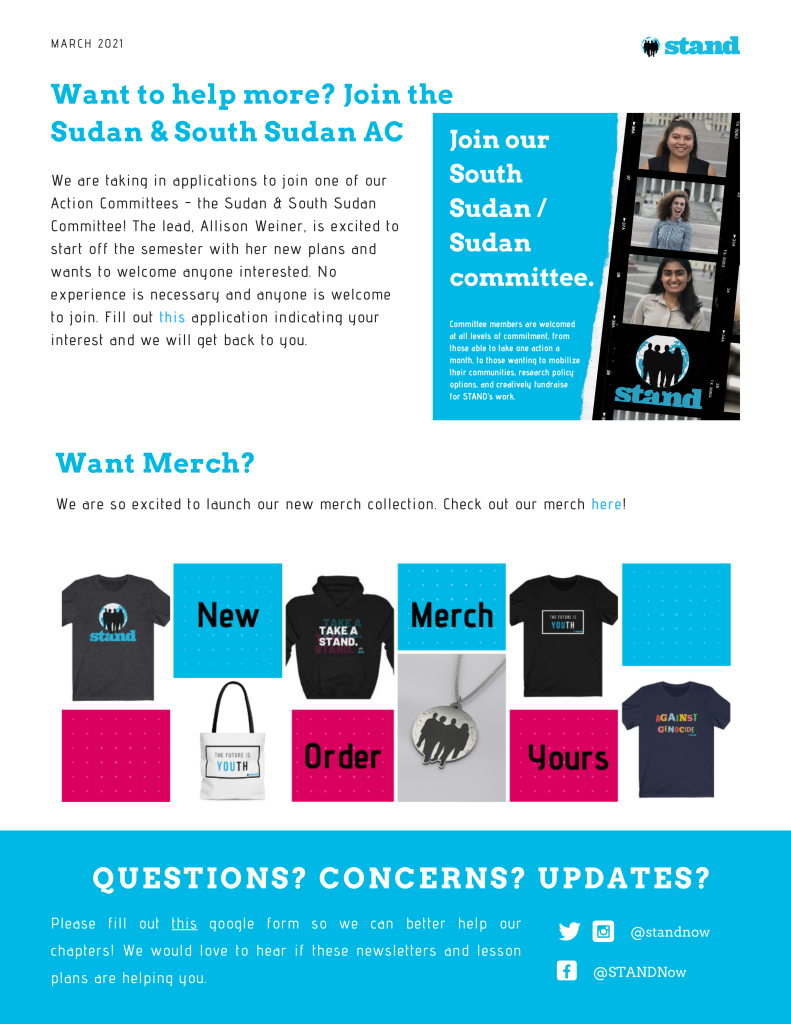 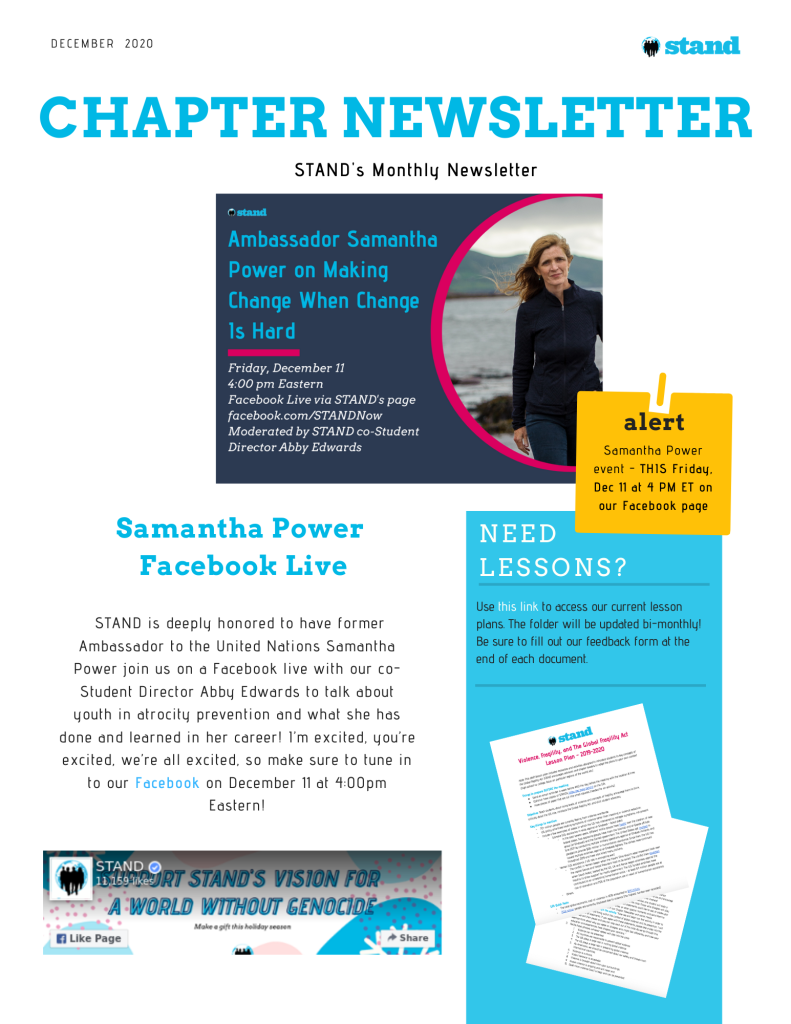 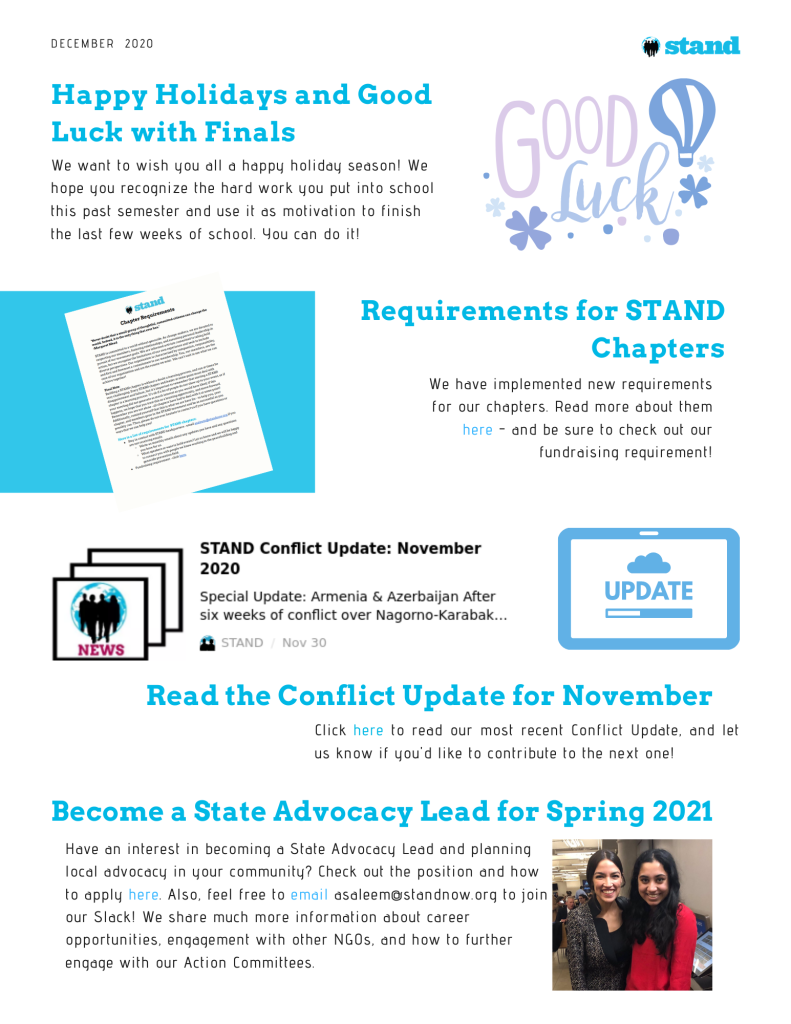 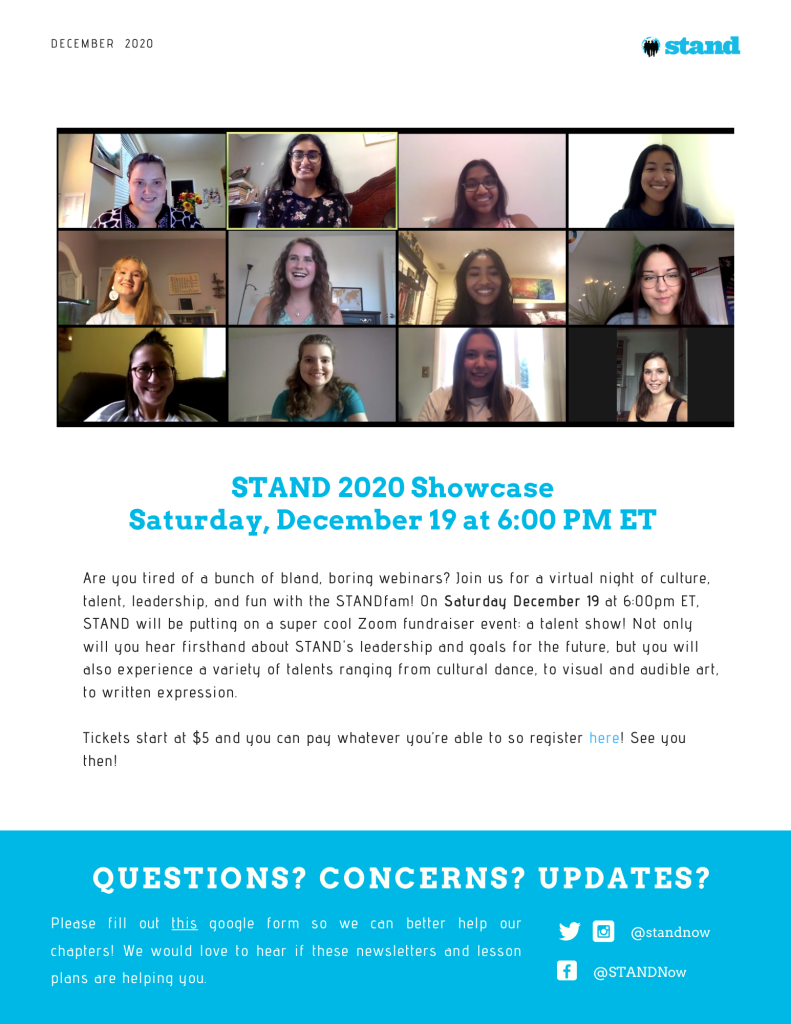 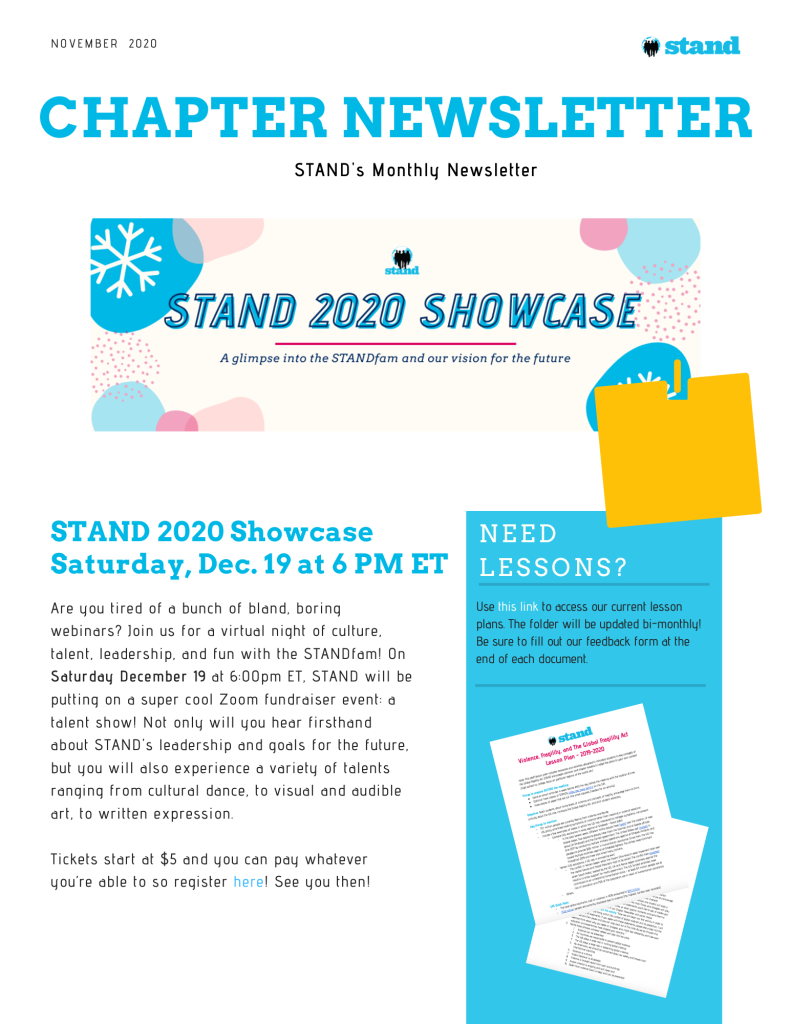 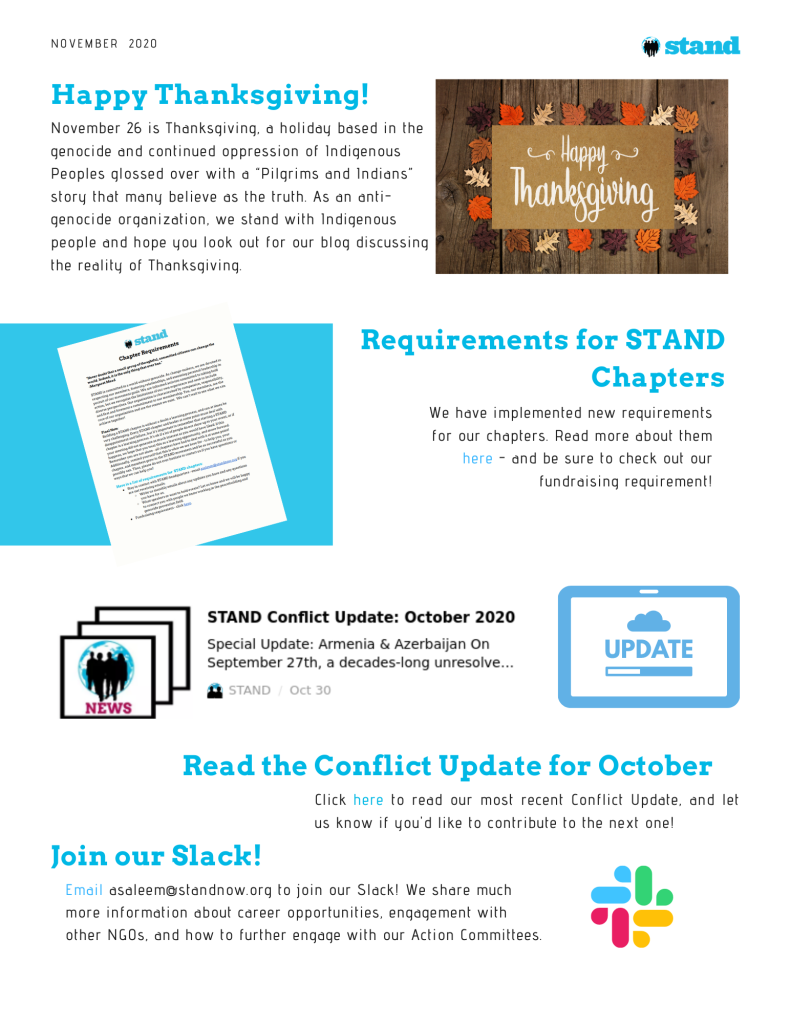 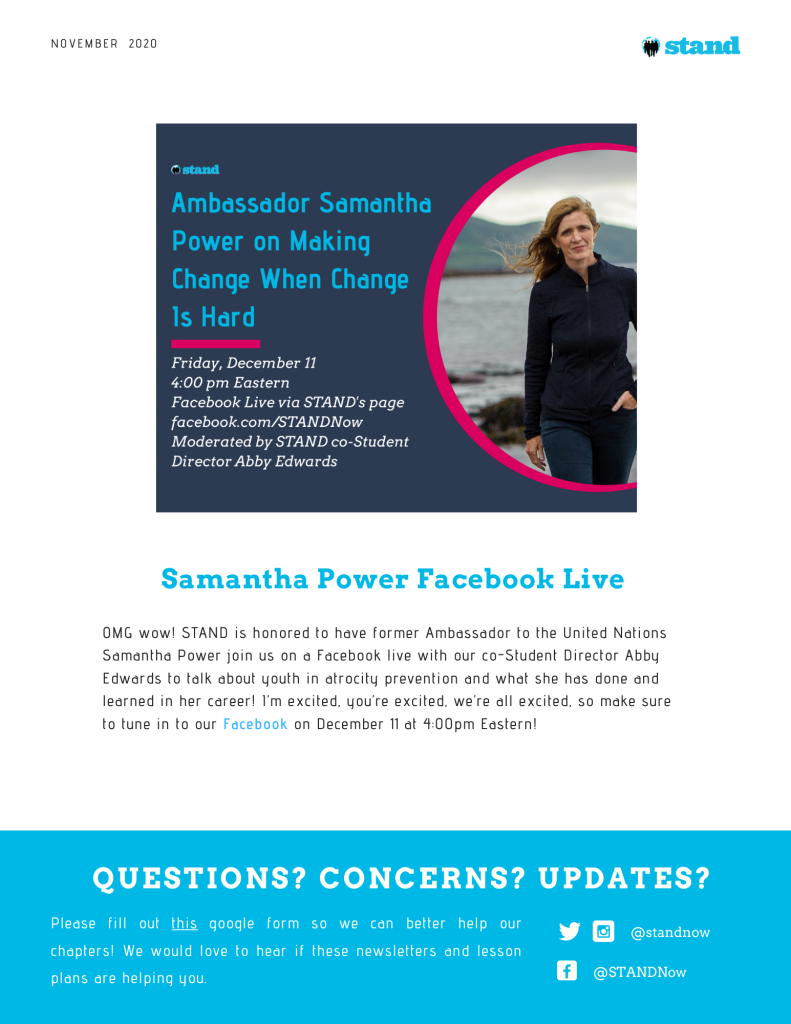 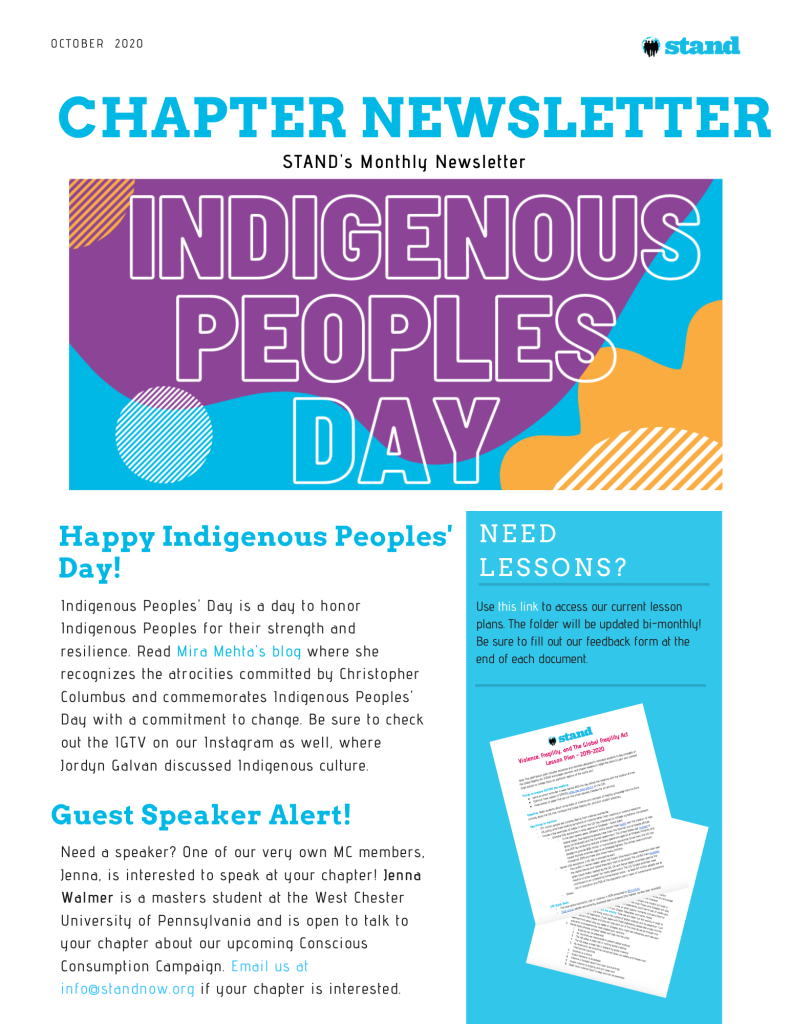 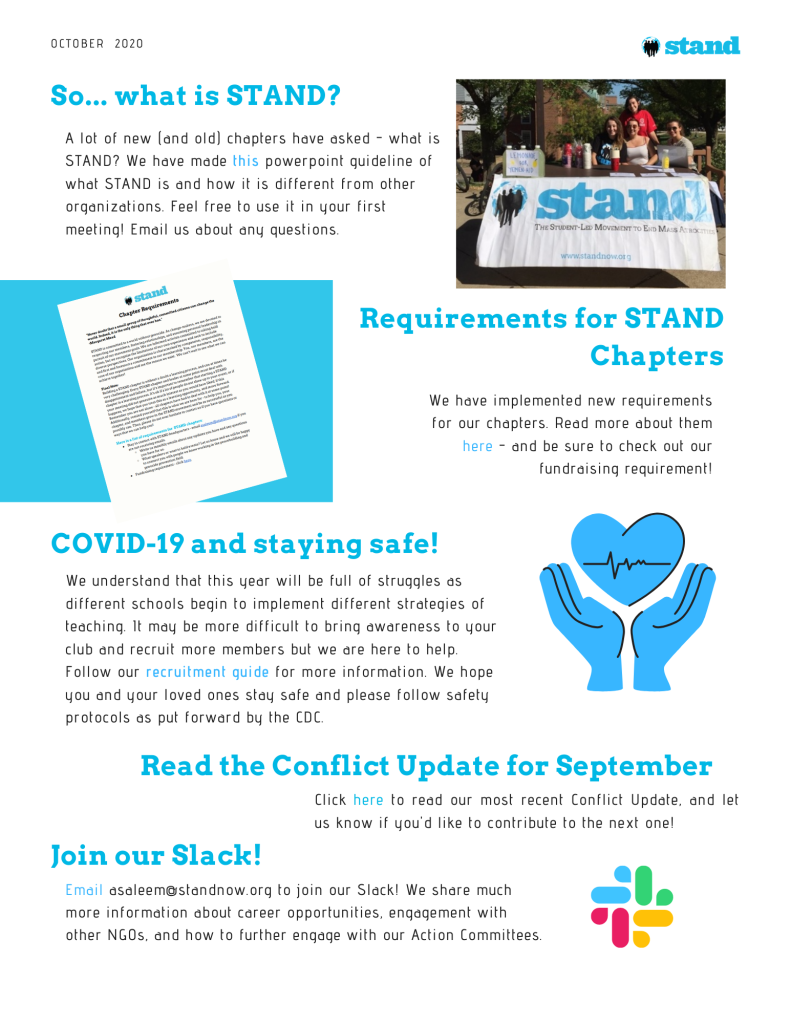 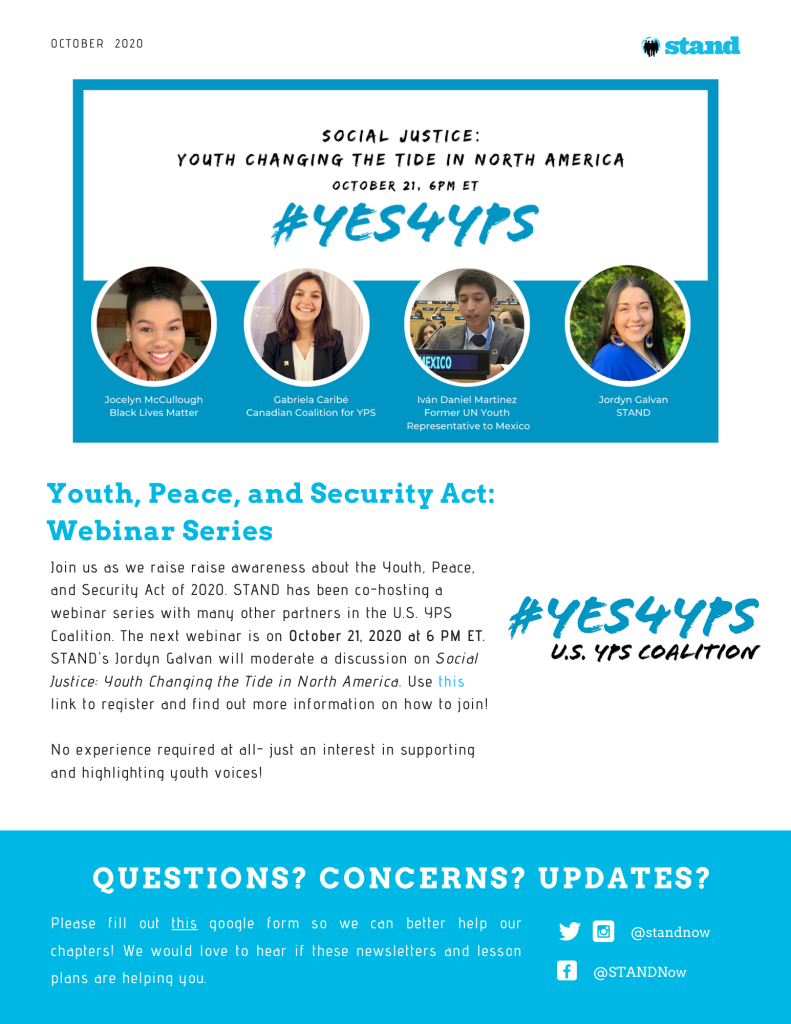 STAND’s Outreach team compiles a monthly newsletter for chapter leaders and members. Read along for the latest news and resources from STAND.
Download the complete newsletter here. 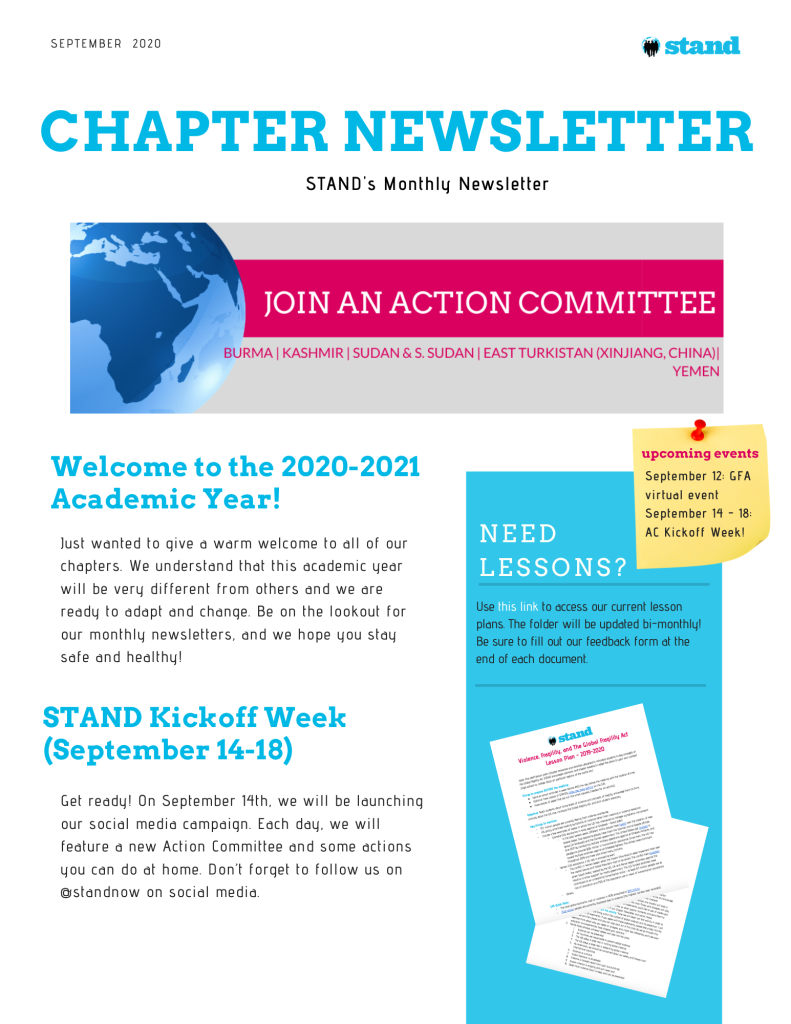 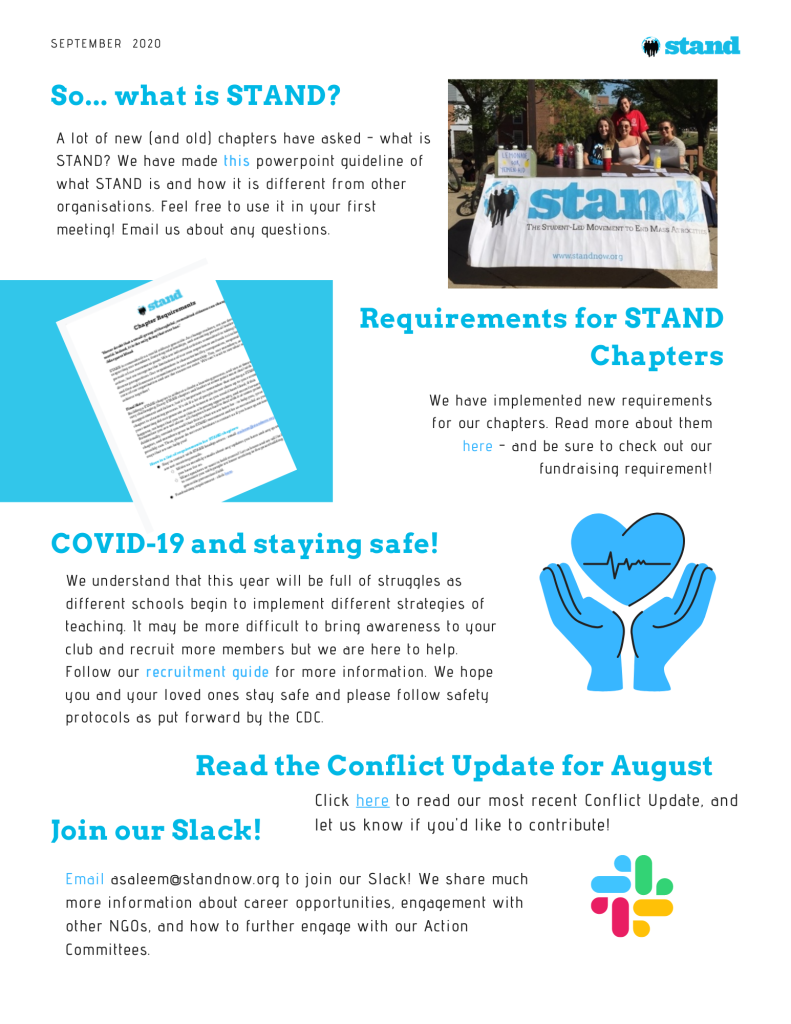 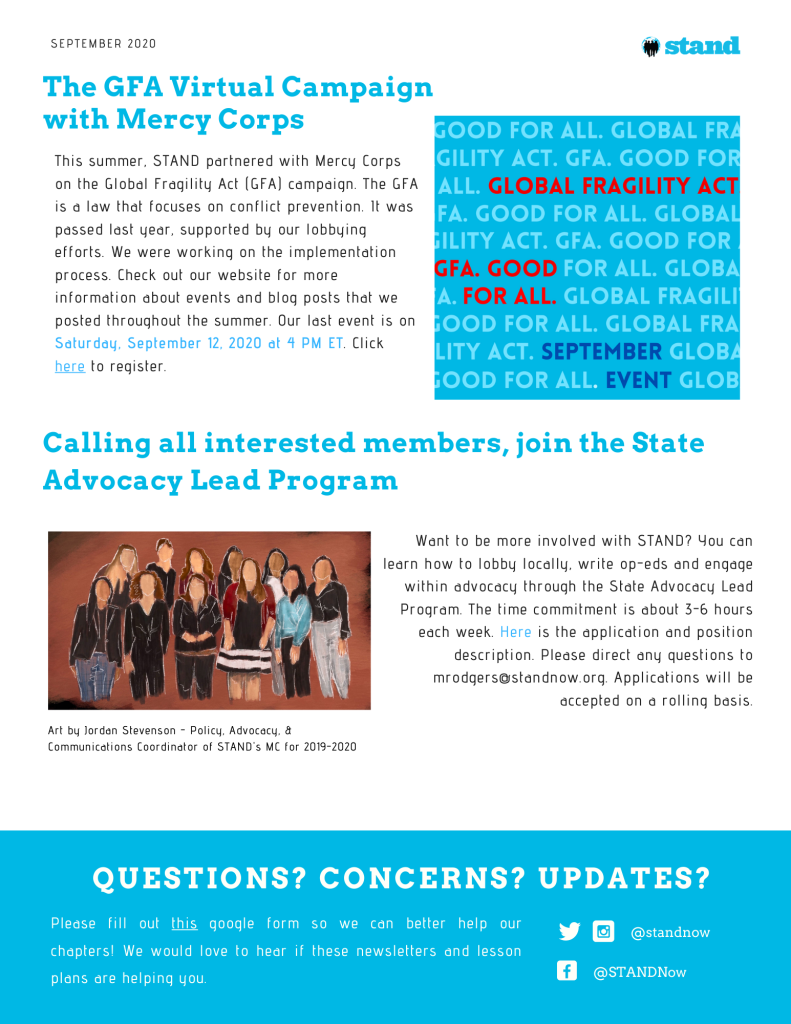 Thousands of Ethiopians gathered in the Oromia region to protest a dramatic housing crisis at the end of February, when the government began to demolish thousands of “illegal” homes in Oromia, which surrounds the capital Addis Ababa. The government intended to tear down approximately 12,000 houses that were built on government land because they allegedly did not have building permits. The demolitions have already displaced about 1,000 people.

To address this displacement, the government has planned to allocate about 51,000 flats to residents to solve the shortage of housing. The apartments are located in the southern outskirt of Addis Ababa, in Koye Feche. This operated using a lottery, where the winners were required to register for housing. The different types of registration included a scheme called 20/80 and 40/60, where residents were asked to save 20% and the government would provide a loan to help with the 80%. This was also applied to those who could save 40%. Those who saved 100%, were allegedly told they were entitled to apartments, leaving many residents upset, especially those who were unable to save 20%. Victims of this lottery are mostly farmers, who are struggling to make ends meet and have a low chance of winning the lottery due to low income. Takele Uma, the mayor of the capital, stated that he sympathized with the pain of “those who have lost [their] farmlands in order to clean for the these housing projects”.

In the beginning of March, about 12,000 of the homes were allocated by the Addis Ababa administration. The Oromo people, the most populous ethnic group in Ethiopia, have claimed that the government is acting out of “jurisdiction” because they are not considering the local Oromia government. Many protesters are carrying banners saying “our land is our bones,” hoping to stop the housing allocations.

This forced displacement has impacted the lives of the Oromian Ethiopians, especially for those who cannot register for housing. Prime Minister Abiy Ahmed, a reformist from the Oromia region, should address the concerns of his own people.

On February 13, the U.S. House of Representatives approved a War Powers Resolution that would require the U.S. to end military support to the Saudi-led war in Yemen. This is a historic step towards ending the crisis in Yemen, but in the short term, it will have little effect on mitigating the suffering of Yemeni prisoners.

Recent articles have reported on an “American presence” in Yemeni prisons, showing evidence of Americans playing an active role in leading interrogations. The Daily Beast describes one detainee, Salvatore, who admits that he was a member of Al-Qaeda 20 years ago. In the prison, Salvatore and other detainees were blindfolded during interrogations.

During the interrogations, Salvatore was questioned by two people, one who he describes as having an American accent and giving commands and the other, presumably an Emirati, who asked the questions. Salvatore recalls that John, the presumed American, would whisper something and the Emirati would then question him. Another detainee interviewed by The Daily Beast gave similar accounts—both describe seeing Americans in military uniforms with American flag insignia.

Both detainees also recall the brutal methods of torture, either following interrogations or on their own. Al-Hasani recalls being electrocuted under his armpits and genitals and intense beatings. Both also recalled that other prisoners were sexually assaulted with an object known as the “Opener.” Salvatore, while not subject to this specific method of torture, was threatened with rape after being stripped naked. In addition, a dog, nicknamed Shakira was also used for intimidation. Shakira was claimed to be the size of a donkey and al-Hasani claims that she had torn off the chest and stomach skin of another prisoner.

The Associated Press has also reported on an American presence at a secret prison at the Riyan airport. A former prisoner said that men in civilian clothes, who the Emirati claimed were Americans, would show up for interrogations. Emirati officials would ask questions and translate the answers to the Americans. Officials in the Yemen military also claimed that Americans were conducting interrogations at sea. The prisoners suffered similar methods of torture as Salvatore and al-Hasani: sexual assault and severe beatings.

The Pentagon released a report stating that military personnel has been in Yemen since May 2016 in order to interrogate members of Al-Qaeda, but deny the use of torture: “[The Department of Defense (DoD)]  has not developed any independent, credible information indicating that U.S. allies or partners have abused detainees in Yemen.” Meanwhile, Chief Pentagon Spokeswoman Dana White claims that DoD has “found no credible evidence to substantiate that the U.S. is participating in any abuse […] We would not turn a blind eye, because we are obligated to report any violations of human rights.”

Despite these protestations, the firsthand accounts should be investigated, and anyone found complicit in torture must face consequences. As Salvatore remarked upon his eventual release, “Why would they blindfold us? So that we wouldn’t say anything.”

In December 2018, the United States Holocaust Memorial Museum (USHMM) reported that there is compelling evidence that violence against the Rohingya crisis is genocidal in nature. The report condemns the mass atrocities that the Rohingya population has suffered at the hands of the Burmese military – including crimes against humanity and ethnic cleansing.

In September 2018, two Reuters journalists were sentenced for 7 years in prison for investigating the Rohingya genocide. The journalists, Wa Lone and Kyaw Soe, were detained and arrested for violating Burma’s Official Security Act on December 12, 2017.

Prior to his arrest, Lone had spent weeks investigating Battalion 8, a military unit in the northern Rakhine state. His investigation led him to acquire photographs of a group of Rohingya Muslims before and after they were killed. In the background of some of these pictures were members of Battalion 8. Lone’s Reuters article outlined the murder of the ten individuals, uncovering startling practices within the  Burmese government, and ultimately leading to the journalists’ arrests.

Since then, Reuters has published several articles tracking the legal journey of these journalists and advocating for their release. A Reuters Investigation into their arrest found that Wa Lone was deceived by a phone call from Naing Lin, a corporal in Myanmar’s 8th Battalion. The officer urged Lone to meet him on the outskirts of Yangon. Lone questioned why the police would want to meet him at night, but after discussion with other reporters decided to go.

Lone took another reporter, Kyaw Soe, and met the officer in a beer garden. The officer told the reporters about being under attack by Rohingya insurgents. At the end of the conversation, the colonel handed Lone a copy of the newspaper containing documents inside. As the reporters left the restaurant, they were surrounded by men in civilian clothes and arrested.

In September 2018, both men were found guilty in a trial and sentenced to prison for seven years. The United Nations, Canada, Australia, and United Kingdom have condemned the verdict. British Foreign Secretary Jeremy Hunt has publicly claimed that the two journalists are innocent, recording a series of videos on Twitter to demonstrate his commitment to bringing justice to both the Rohingya and the journalists. Time Magazine has named Lone and Soe as Persons of the Year for documenting the deaths of the ten Rohingya. Ben Goldberger, Time Magazine’s assistant managing editor, said that he hoped it was “a reminder of the importance of defending free expression and the pursuit of truth and facts.”

In the first week of January, the journalists appealed their imprisonment but were rejected by the Yangon High Court, crushing their remaining hopes. Lone’s wife, Pan Ei Mon, who had given birth to a baby girl since her husband’s imprisonment, was saddened by the results. She stated, “Since I became pregnant, I stayed strong on the hope that Wa Lone would be released. After yesterday’s verdict, if feels like my hopes have been destroyed.”

Next steps that the journalists can take include advocating for a presidential pardon or an appeal to Burma’s Supreme Court. The current president of Burma could be difficult to win over, however, as a loyalist to Aung San Suu Kyi. Since the beginning of the Rohingya genocide, her reputation as a Nobel Peace Prize laureate has been tarnished due to her continued disregard for the plight of ethnic minorities in Burma. Notably, the United States Holocaust Memorial Museum revoked their prestigious Elie Wiesel Award from her in March 2018 because of her inaction on the Rohingya crisis, and some reports label her an authoritarian due to the arrest of 135 journalists since her election. She has denied that Lone and Soe were jailed because they were journalists. Because of these recent actions, UN investigators claim that she has failed to use her “moral authority” for the better.

The arrest of the journalists shows that in an age of politics where the pursuit of the truth is endangering, we must support those upholding the values of truth and justice. You can stay up to date on the journalists’ legal case here.